Paizo’s announced a pretty broad set of changes for Season 4 of Starfinder Society. A recent blog post has most of the details, which you can read here.

Starfinder Society is moving to the Achievement Point model that’s already in use with Pathfinder Society 2nd Edition. This one change leads to a few other, more specific changes:

Why is this happening?

In large part this change is being made to force us to report accurately so that Paizo has a better idea of the popularity of Organized Play and can accurately assess it when planning and budgeting. Here in Pittsburgh, we have been very good about reporting, but we have also identified some bugs in the Paizo reporting tool that have led to reported games disappearing from the database. Those bugs have been reported, but they’re hard to pin down. If you see a game missing and it’s been more than a couple of days since the game, please let us know! We might be slower than normal in reporting, or we could have reported the game and didn’t realize it had disappeared.

There’s another reason for it as well, which is that it consolidates a number of programs that had previously all required a lot of hands-on support by Paizo developers into one program that is much easier for them to administer. By unifying everything, this also provides people who can’t attend conventions a way to earn even the rarest of race boons. And if you only want race boons, you’ll only get race boons. You won’t need to worry about getting your 73rd Tune-Bot, say.

How does this affect Pittsburgh?

Some of you may have noticed how far behind we are (scratch that: how far behind I am [Alex]) on providing boons you’ve won! You will still get those boons and they will still be valid. We’re working through the list now.

We try to regularly remind our SFS GMs about the Regional Support Program race boon, but not everyone takes us up on it and not everyone remembers to ask about it. If you’d like to start on your race boon and get some credit for it, let us know!

We’re also working to get our RSP support, but we’re not quite there yet. We’ll post an update when we have one.

What can I get with my Achievement Points?

In order to see and spend your AcP, you need to:

This system includes chronicle sheet boons, faction boons (that used to be in the Guide), and purchasable boons that replace convention and Regional Support Program boons. A brand-new feature also lets you buy race boons across systems! You can use your PFS2 AcP to buy a Starfinder kobold boon, for example, or use your SFS AcP to buy yourself a Pathfinder android. 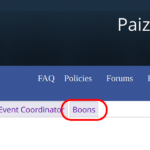 Second: Click on the Boons tab. It’ll be off on the right side.

Note that the list of boons in the Guide also includes the purchasing plan, which is how you get things like Raise Dead cast on you. So you’ll need to spend AcP on that–cutting into your race boon earnings, potentially!–but at the same time, you won’t need to worry about every character needing to bank fame, and you’ll be able to get Raise Deads cast on those first-level characters you really liked.

Can I trade boons / AcP?

You’ll still be able to trade and gift the “paper” boons earned from conventions and the Regional Support Program that have been given to you in printed or PDF format. Unfortunately, we’ll not be able to trade or gift boons earned through the Boons tab on Paizo.com, nor are we able to gift AcP. Paizo is aware that this is something we’d like to do, and they haven’t ruled it out in the future, it’s just not available right now.

No comments yet. Be the first.
© 2016 – 2022 Pittsburgh Pathfinder Society where applicable.

This website uses trademarks and/or copyrights owned by Paizo Inc., which are used under Paizo’s Community Use Policy. We are expressly prohibited from charging you to use or access this content. This website is not published, endorsed, or specifically approved by Paizo Inc. For more information about Paizo’s Community Use Policy, please visit paizo.com/communityuse. For more information about Paizo Inc. and Paizo products, please visit paizo.com.